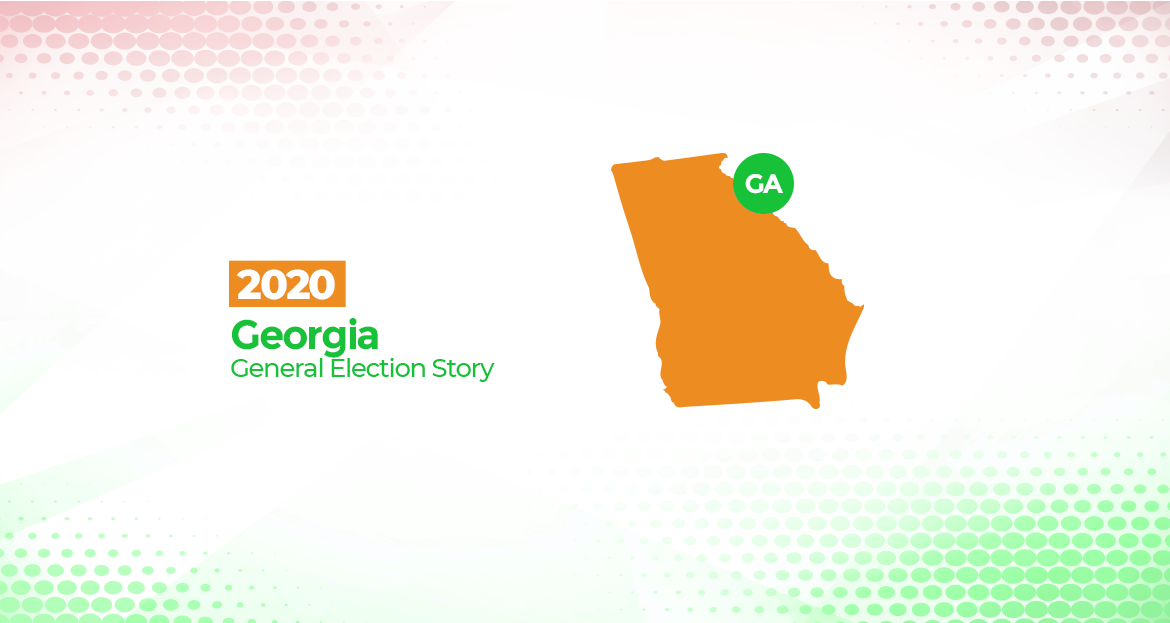 A head to head comparison of the Georgia 2020 General Election gives us an idea of the break down of the voters.

In 12 years, the Democrat party has not expanded the number of counties in which they win as evident from the chart above.  Since President Obama's 2008 won around 880 counties of any Democrat in 12 years (maybe even 20 years), with Mrs. Clinton winning only 485 counties in the country. The increase or decrease for President Obama or Mrs. Clinton did not come from GA.  Vice President Biden,for his win made the map less blue compared to Mrs. Clinton. However, he was able to generate a 591K vote gain compared to her winning less counties.

The 12 years show the Democrat Party has figured out to win races,  by winning a handful of counties in a state through massive vote turn out in the few highly populated counties, election after elections with absolutely guarantee.This benefits the Democrat party by taking on a aggressive campaign like a Republican candidate has to.  Vice President Joe Biden's campaigning in 2020 was a stark contrast to President Trump's.  It also creates a massive vote bank in a high density county, where ballot harvesting (where allowed), absentee/mail-in ballot pools could help the Democrat candidate more than a Republican candidate.

With lax voting regulations, a small group of counties has the potential of  holding the entire state for ransom in policy and agenda. For example, In Georgia 30 counties out of the 159, or in low voter turn out races the top 15 populous counties could make the state Blue if the Republican party fails to bring enthusiasm to their side.

President Trump won 129 counties out of the 159 counties that make up Georgia. The record shows that VP Joe Biden won 30 counties.

The Democratic party out performed their voter growth rate which was 33K from  2008-2016 to 798K votes starting from the same time into 2020. That is a 2400% growth rate in 4 years which is incredibly impressive or fantastic based on the party the reader belongs too.   This is 3 times more than the Republican gain in 8 years. The main reason being on how poorly the Republican party did in 2008 and 2012 with expanding their base stated below.

The Chart 2 (enthusiasm index), shows the voter gain in both parties as compared to the previous year.  It is a 2 way comparison, 1st comparing with the previous election and then a comparison between the both parties.  For example, 2008, the enthusiasm for President Obama was much than John Kerry's in previous election and for the Republican candidate John Mccain was definitely less than in President George W. Bush's re-election.  For President Obama & Senator Romney, the enthusiam went negative and that didnot improve for Mrs. Clinton and President Trumps 2016 election.  2020 Republican party enthusiam grows for since President Bush's reelection campaign and so Democrat party did better than President Obama's 2008.  (Unfortunately, this amazing even has been marred with claims of voter fraud. If found, baseless, this would be an incredbible achievement.)

The chart 3, is a troubling factor for the Democrat Party, the number of counties they win has not increased in 20 years and in 2020 the actually lost a county to the Republicans which are needed to win Congressional races and Senate races at the Federal level.  The same is needed for state house and senate races.  It is also amazing that the Democrats seems to be able to win state wide elections by winning 1/5 the number of counties. The same story with the Republican Party. The next level of granularity in this analysis would be are the numbers increasing towards which party in these counties.

The Overall participation rate (P.R = Voted/Registered)  in chart 4 for the 2020  election fell from 73% to 70%.  This is a strange phenomenon, considering how low the enthusiasm index in the previous 2 elections.  In 2020, the total number of vote increase is close to a 1 Million (569K for D,  359K for R) votes over in 2016. There are only 2 reasons why the participation index drops, (1) Voting Numbers drop  (2) Registration Numbers Increase.  In 2020, the voting number did not drop, but the registration numbers must have increased.

When comparing V.P Joe Biden's votes in primary with Mrs. Clinton's in 2016, he beat her in almost every single county w.r.t the number of votes (except 8 counties out of 159 where he got collectively 500 votes out less than the total 912K votes than Mrs. Clinton).  Almost the same pattern, where Vice President Biden, wins almost all the counties in a head to head match up with Mrs. Clinton in Michigan, Pennsylvania, Wisconsin. Incidentally, these states have cases in court challenging the election results and the vote counts. Taking a closer look at  Fulton County, Mrs. Clinton got 82K in 2016, while VP Biden got 134K votes in 2020 a 53K difference. In Gwinnett  48K, Dekalb 46K, Cobb 45K difference respectively.

When compared to Florida, which seems to be the gold standard for election prediction, where the primary votes matched the results in the general elections, where Joe Biden's voter turn out from him Miami-Dade county was less than Mrs. Clinton's 2016 primary and so was the turn out for 2020 general elections was lower than what Mrs. Clinton got in 2016.

Comparing the size of the vote of the primary & general elections along the lines of the counties gives a pretty good idea of where the campaign battles need to happen?   The top 20 year trends of these of the top 15 counties should show which party is making inroads in the state and by what margin.  These 6 pie charts for each county shows 2 definite trend.  The First(I) , In majority of these (16) counties, Democrat Party gains only seem to increase, unlike the Republican Party which tends to wax and wane.  The second (II), the Republican Party Performance seems to always inspire the Democrat Party Performance (Especially after 2008).  If the Republican Party does well, the Democrat also seems to match in their performance counties (the only exception was 2008, where the party had a great election due to President Obama's candidacy and campaign while Senator Mccain's poor performance in both areas).

(I)  First Trend:  The Democrat Party % gain never go down irrespective of Candidate or Campaign in Counties like Gwinnett (Over 20 year period)

Again, looking at Gwinnett county, 2000 to 2004 where the Democrat party  (32%) improvement matched the Republican (33%) improvement to almost identical.  The lack of  improvement also matched the 2008-2012.  These trends appear as parallel lines on graphs where the slope of these lines tend to be identical (math concepts taught in middel school).  Republican's in 2020  had 12% gain (ignoring the 8% drop of 2016 which they improved), the Gwinnett Democrats showed up in the gain of 42% gain a 30% jump.   Vice President Joe Biden, % gain was 10 times more than President Obama's 2012 re-election.   President Trump had a 12% jump in wihch means he is was not as unpopular as his 2016 performance with a 17K vote gain in Gwinnett (meaning he kept his 2016 numbers and added 17K new voters). It is just that the Democrats stellar 70K jump since their 2016 in the 2020 election (166K to 236K).  Based on 1st Trend, this is could be the new lowest number for the Democrat's in the Gwinnett county as their numbers never seem to have gone down in the past 20 years. (Once a Democrat County, Always a Democrat County?)   This is a metoric gain of 160K gain from 60K in 2000 to 236K in 2020, while the the Republican's seem to have a steady gain of 40K which is 1/4th.     [The Reader  could visit http://eddy.truefairnews.com/ to do a detailed demographic study on that county]

In the Primary, President Trump won 118 counties in a 2-way match up. VP Biden from the Democratic Party won 41 counties.

Popular Vote Victory Contributed by Georgia at the 2020 General Elections

These 15 counties play an important role in these primary elections. If a candidate, can get a sizable majority in the larger counties (Fulton, Gwinnett, Cobb and DeKalb), it becomes very difficult to win majorities in the smaller counties with out voter out reach and increased voter participation in them.

Fulton, Gwinnett, Cobb and DeKalb, the larger counties in Georgia, voted in favor of VP Joseph Biden giving him a 625k vote advantage out of those counties. On the other hand, President Trump's steady win at many more of the smaller counties was not enough to overcome that deficit, thus making Biden gain an upper hand in the State of Georgia.