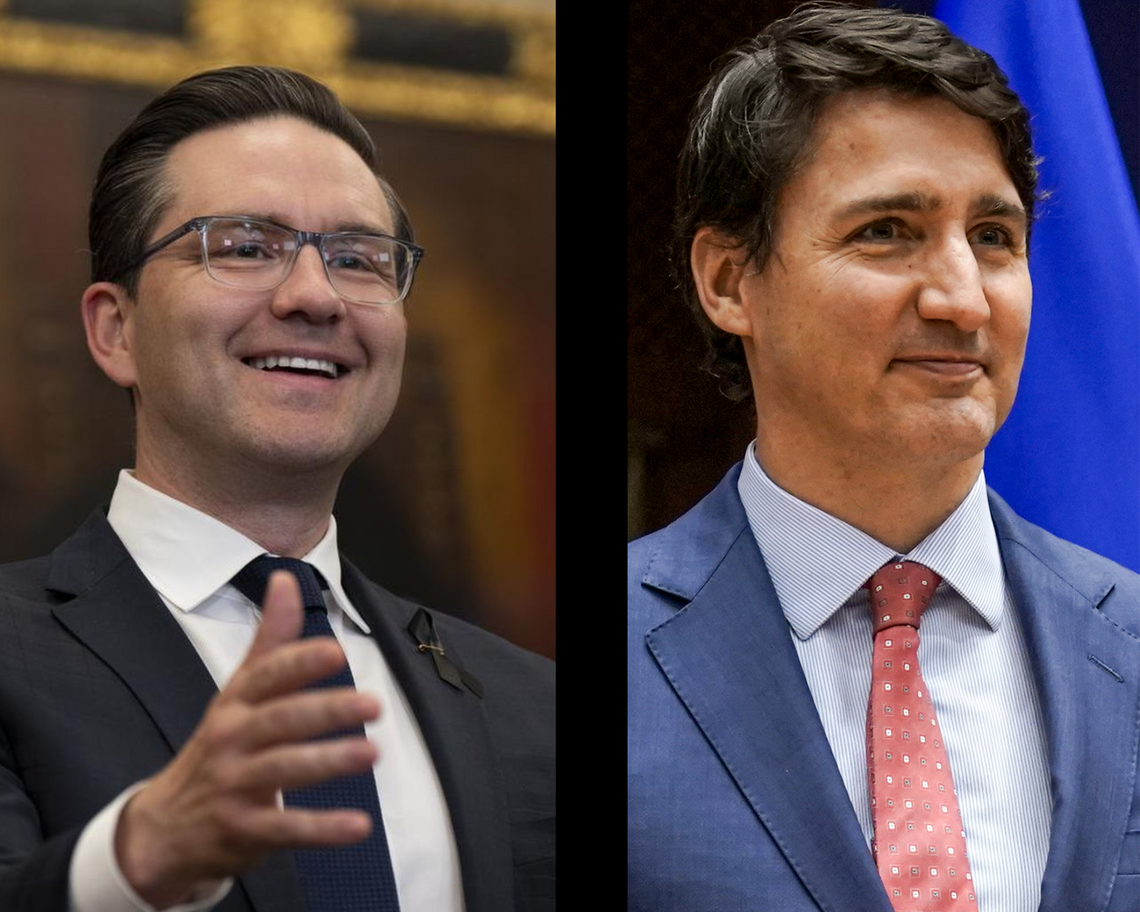 According to a survey, Poilievre now tops Trudeau as the candidate for prime minister

According to a recent survey, Conservative Leader Pierre Poilievre has surpassed Prime Minister Justin Trudeau in terms of popularity as the country's top candidate less than a month into the position.

In an Ipsos study done exclusively for Global News, 35% of respondents in Canada said Poilievre is the best option for prime minister, while 31% said the same about Trudeau, who is behind the new leader of the opposition in most provinces, including Ontario.

These figures are the latest warning flag for Trudeau's Liberals, who are dealing with a population that is growingly disgruntled and worried about affordability and inflation, according to polling.

According to Darrell Bricker, CEO of Ipsos Public Affairs, the popularity of Mr. Poilievre is more a product of people searching for an alternative to the present prime minister than anything he has done or said.

"It's quite obvious that the majority of Canadians are seeking alternatives right now,"

Even in British Columbia, where he received 38% of the vote, Trudeau trailed Poilievre by two points. Poilievre surpassed the current prime minister in every province save Quebec and Atlantic Canada.

To unseat the Liberals, the Conservatives have attempted for years to gain traction in Ontario's electorally robust Greater Toronto Area.

With 41% of the vote there vs 34% for Trudeau, Poilievre seems to have found the solution.

Poilievre's support also contrasts sharply with polls on the eve of the last election, which saw Trudeau and former Tory leader Erin O'Toole tied at 28% each, with O'Toole behind by one point. That finally manifested itself in the vote, even though O'Toole's Conservatives won the popular vote by a margin of approximately 1%.

The latest poll follows one released on Wednesday that revealed the Conservatives now had a five-point advantage over the Liberals among committed voters. In Ontario, where the Tories received 37% of the vote, that lead increased to seven points.

According to that survey, just 33% of respondents favor Trudeau's reelection, down four points from last autumn, and two-thirds of people believe it's time for another party to replace the Liberals.

Over 1,000 Canadian individuals were polled over the same period, from September 19–20, in the poll that was released on Thursday.

Compared to his new main political rival, respondents viewed Trudeau more negatively, which suggests that people have lost interest in him.

Poilievre was seen as the leader most likely to have the best plan for Canada (24%), get things done (24%), and want to lead Canada for the right reasons (25%), while Trudeau received just 21% support for all three questions. Both Poilievre and NDP Leader Jagmeet Singh trailed Trudeau in favorability.

Most notably, a double-digit majority of respondents—37%—felt that Trudeau was "in over his head" as prime minister, compared to Poilievre's 21%.

Bricker remarked, "That's over someone (voters) don't even know. So, the prime minister is the subject of many inquiries from Canadians.

At 26%, Trudeau was still regarded as a leader who will respect Canadian traditions and institutions and had the finest temperament and maturity to be in charge of the federal government.

Although Poilievre surpassed Trudeau on particular questions about topics including health care policy, taxpayer expenditure, honesty, and whether he would "fight for the middle class" as prime minister, those results were just two or three points ahead of Poilievre.

According to Ipsos polls, one-third of Canadians feel that none of the main parties are ready to handle the key concerns influencing their choice to vote. Voters' top concerns are the cost of living and affordability, followed by the economy and housing (23% each).

When asked who they can trust to make the best judgments about government expenditure and health care, four out of ten Canadians indicated they don't know.

However, according to 42% of those polled, neither party would be more effective than the others in addressing housing affordability or availability, while 34% and 30% of respondents said the same regarding the cost of living and healthcare, respectively.

According to 42% and 33% of voters, respectively, the Conservatives are thought to be the party most suited to combat the economy and inflation. As the best party to combat climate change, the Liberals and NDP deadlocked at 25%. The data, according to Bricker, are bad news for the Liberals as they try to deal with several problems at once.