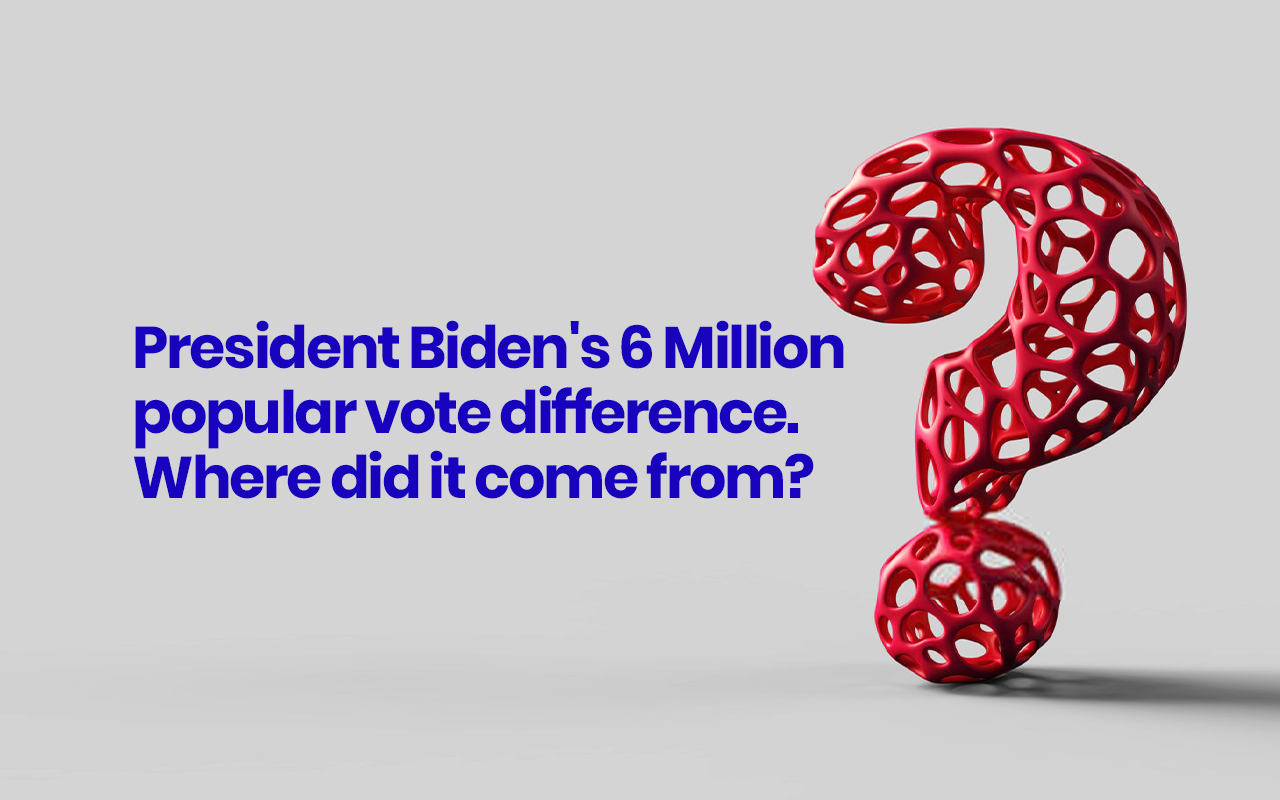 Analysis: President Biden's 6 Million popular vote difference. Where did it come from?

So where did President Joe Biden get his 6 Million popular vote gains?  What was his model?  Was it the "large scale Fast Food Model" or "small scale Boutique restaurant chain model" ?

President Joe Biden, in a head to head match up with President Trump, won only 1/6th of the 3000+ counties in the country. In these 502 counties, he made a large  vote difference of roughly 23.5 Million votes from these counties.  To get the vote difference, subtract the 55.5M from the Votes in Million column in 502 counties where Joe Biden won to vote in 32M Millions column were Trump lost. 55.5-32=23.5 Million votes.    Joe Biden's approximately 23.5 Million vote lead Trump has to erase by getting votes in all the remaining 2559 counties where he got the majority vote, to win the popular vote by 1 vote.

Majority of Joe Biden's 80M votes ,i.e 55.5 M came from 1/6th (502 of the 3000+) of the counties in the country and 24.5M votes from the remaining 2559 counties. In these 502 counties he increased his margin from Mrs. Clinton's 2016 performance by 10M. Trump got 32M from the same 502 counties, increasing his 2016 27M by 5M and Trump got 42M votes in the 2559 counties. For a President to be almost 1/2 as popular in majority of the country to the candidate he won over, could be a troubling from the point governance if the policies of each of the candidates are drastically different.

In the last 20 years, in 1/5th of the counties where Joe Biden won, the Democratic Party, were are 32.1M in 2000 and grew to 44.9M in 2008 for President Obama. Mrs. Clinton's support dropped to 45.8 in 2016.  In 2020, President Joe Biden, increased the numbers in these 502 counties by close to 10M votes to 55.5M, the highest number for any Democrat president. Even with this incredible increase, he was unable to pick up the large states of Texas, Florida or Ohio, nor was he able to comfortably win any of the rustbelt states which Mrs. Clinton lost and the or the battleground states that he won. Were these 10M votes in in-consequential blue states? (A deep dive on this could help answer these questions.). From 2000 to 2020, the Democratic party increased their numbers from 32.1M to 55.5M in these 502 counties. 23M votes increase is a sizeable increase.  The Republican party has increased its numbers from 24.1M to 32M, where Trump increased it by 5.2M votes in 2020.

Could be the reason why the Democrat party did not see the blue wave in 2020, be that it gained 10M votes in already blue states/counties? Or is it because of the huge gains the Republicans are seeing all over the country all these 20 years going from 25M to 40M without losing their base? If the number of votes in 5/6th of the country for the Democrats only grew by 400K, how it possible to create a blue wave?   Is there something the Democrat leadership, the media and pollsters not looking into?