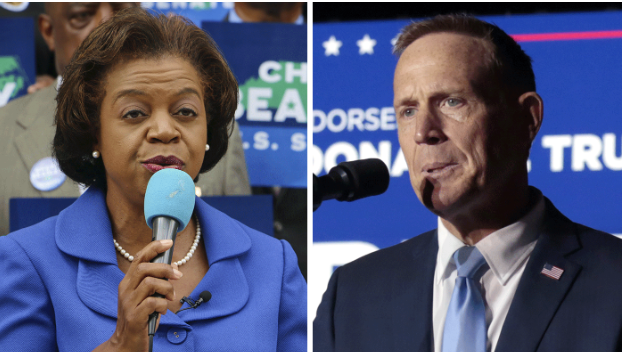 In the campaign for the North Carolina Senate, are Democrats wasting their chances?

North Carolina Democrats are appealing to outside groups to put more money into the state's Senate race, believing it may be one of their best chances to flip a GOP-held seat in November.

Strategists and political operators lament that the contest has flown under the radar for national Democrats and warn against squandering an opportunity in a state that has proven competitive — but elusive — for the party in recent years.

Bruce Thompson, a senior Democratic consultant in North Carolina, said national Democrats are making a mistake by ignoring the state.

Women Vote, EMILY's List's independent spending arm, contributed $2.7 million to the North Carolina Senate election this month in order to draw attention to Beasley's position on abortion rights. The issue has helped propel Democratic candidates up and down the ballot since the Supreme Court overturned Roe v. Wade in the summer.

MAGA Inc., a new super PAC founded by Trump allies, will back GOP candidates like Budd, favored by the former president in their primary.

Thompson and other North Carolina Democrats recognized that the election had been milder than other of the year's major Senate contests.

Compared to J.D. Vance and Mehmet Oz, Budd, a serving member of Congress, is thought to run a better-organized campaign.

He avoided the airwaves for months before airing ads against inflation, government expenditure, and President Biden's low support ratings. He hasn't made the same blunders and errors as other GOP Senate candidates, keeping his media profile low.

"Those guys say the silent part out loud, and Budd has been taught not to," Thompson said of Vance and Blake Masters in Arizona. "Ted Budd's bland. Since he's a good guy, he hasn't gotten in trouble with soundbites.

Democrats believe Budd is no less problematic than past GOP Senate nominees while being largely silent. He voted against certifying 2020 election results and hasn't said if he'll accept this year.

He's also a co-sponsor of a House bill that would outlaw abortions beyond 15 weeks.

Budd isn't avoiding Trump, despite some Republicans' concerns that he could hurt their prospects. Budd committed to "defeat the Biden-Beasley agenda and make America great again."

"It's always been competitive," Heye said. North Carolina's past elections haven't been blowouts.

Democrats have struggled in North Carolina. The last time a Democratic presidential contender won the state was 2008.

Some national groups may be cautious about going all-in on North Carolina this year, especially after Cunningham's loss in 2014. But 2022 may be different, the strategist said.