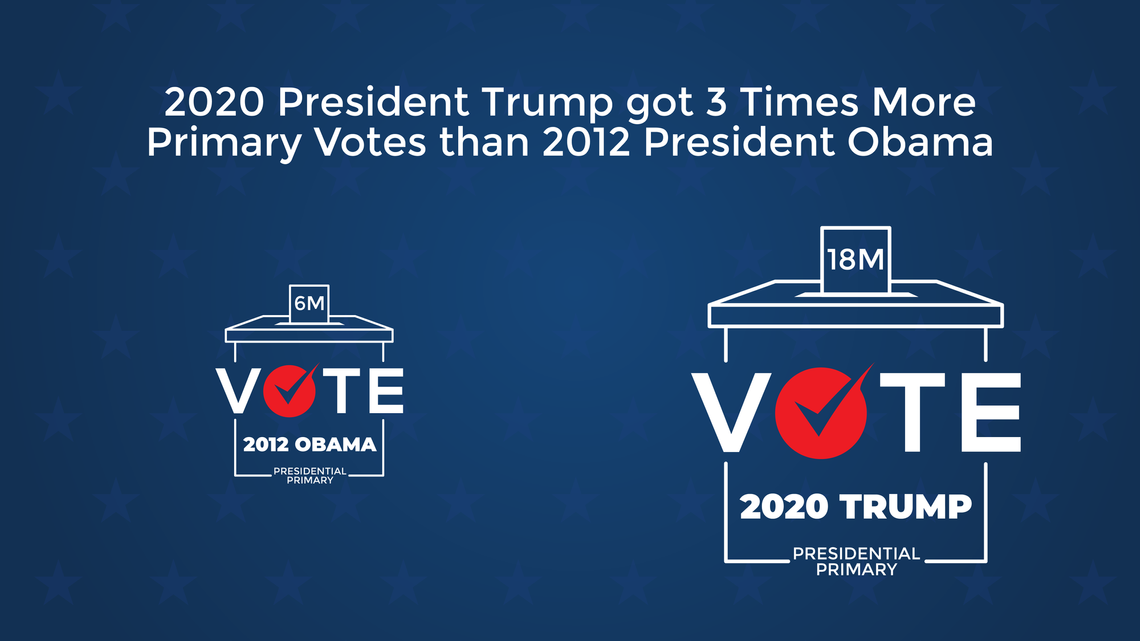 President Obama got 6M 2012, compared to President Trump who got 18M in 2020.  Did the Main Stream Media and Five Three Eight, ignored this enthusiam and relied on their polling instead to be suprised again in 2020?

Below is the head to head comparison of the only states where they were primary elections during 2012 and 2020 to give the reader an idea on the enthusiasm based on the how many voters showed up for each of these candidates.

Most of these numbers for President Trump were better than his 2016 performance. For example, he almost doubled his numbers in Wisconsin and Georgia.    President Trump improved his numbers by 200K in Pennsylvania, 600K in California, 300K increase in North Carolina.   Being an incumbent President, the general

These improvements reflect the trend of over all general election results where he gained 10 Million votes from 2016 to 2020. But in these states, in the general elections, it was a close race.

The next comparison needs be in the total number of counties won by Vice President Biden vs President Trump in the general election to see if there is a difference between President Obama and Vice President Joe Biden's performance.

Main Stream Media and other left leaning pundits did not perform these comparisons or take into account the enthusiasm for President Trump.  This could have been the undoing of these groups of prognosticators again.  Listening to this group majority of the Democrat Party again were caught by suprise on election night on how close the election was actually like in Michigan, Wisconsin or how certain states like Florida, Texas played out as they were not in play at all.  Not only were the leadership of the Democrat Party a prey to this, believed it totally, based on how they campaigned in the last days of the elections and spent their money.  About the people who vote Democrat party, only time will tell will they continue to believe these polling again after the loss in 2016, the non arrival of Blue wave in 2018 and 2020.