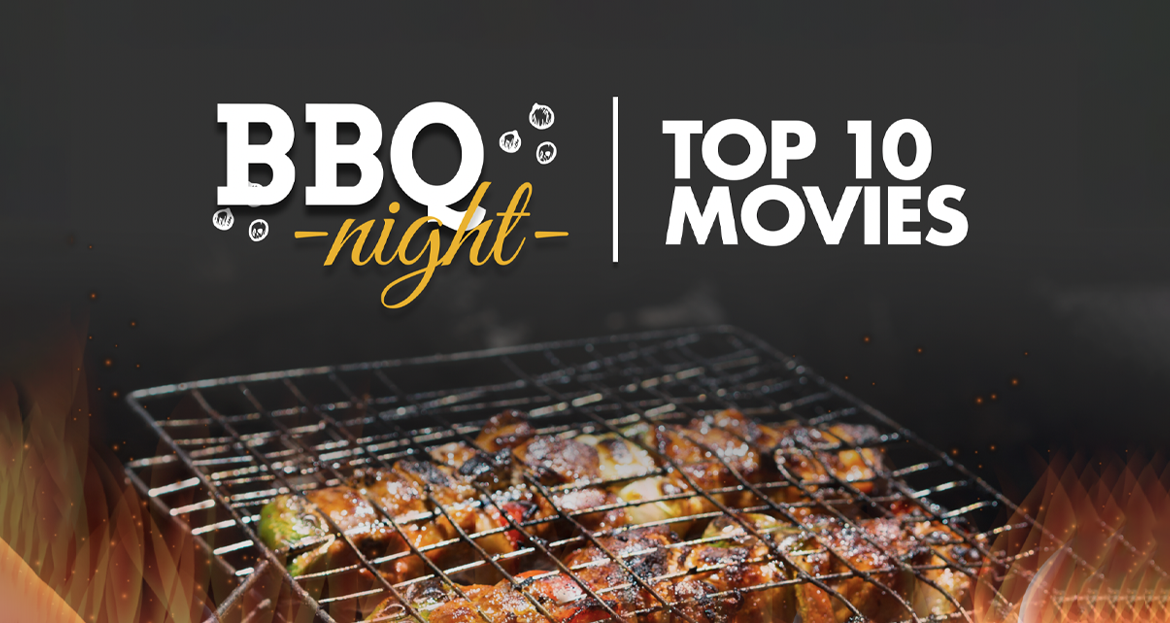 In today’s time, one hardly gets time to spend time with their family and friends, but when they get it there’s always something or the other that takes away their time. You can’t always go out on a trip with your family or friends, but there’s one thing you can do in your backyard and that’s a kickass BBQ Party! A BBQ Party is one of the best things you can host for your family & friends, it's an event where all the things you love are involved, like food, drinks, and your family and friends; but how do we spice it up more so no one gets bored and you can keep people at one place. The answer is by playing an amazing movie; for eg a Mexican movie while you having some meat tacos would be a great combination or if you’re up for something old-school then why not play something in black & white?

We have created a list of the Top 10 Movies to watch at a BBQ Party with your family & friends, which has everything you would need and these movies would match the energy of the environment during this steak-filled night. So, flip that meat over before it gets burnt, and don’t forget to add the perfect sauces while marinating the chicken, push yourself back and choose one of the best movies for your fun night, and here we go!

Now this movie is animation but we are sure you would love the story and it will keep your kids in one place, so yes, it is one of the best options. Pixar has displayed the Latino community with this animated masterpiece, “Coco” has everything you would need for a family movie. This story starts with Miguel who is a 12-year-old kid who loves music and wants to be a singer, but the problem arises when he knows his family has put a ban on music for generations.

Miguel is a Latino and Coco is a movie that focuses on the beautiful Latino community and their struggles, the music and visuals are wonderful it will keep your family & friends entertained throughout the movie. Coco bursts with colorful visuals and life, just like we might expect from a Pixar Animation Studio. The movie is soft and tender but it doesn’t shy away from teaching us about the reality we must face, it’s just the perfect blend of heart and authenticity. Your kids will love to watch Miguel discover and flourish in his dreams when he visits the land of the dead and meets his grandpa who has been a musician in his life, the skeletons grooving to the tunes played are a delight to watch.

Coco isn’t a musical, but the songs you hear in the movie might make you get to your feet and groove a bit to it. This Movie is an open heartfelt tribute to the Mexican Culture but more than that it’s a universal story of how important our families are in our lives. This will bring you closer as a family as you learn lessons during the movie, it will hold a special place in your heart and your kids might watch it more than once.

Home Alone is a masterpiece and will always be a movie that can be watched again and again on such nights, watching 8-year-old kick asses off two burglars who are trying to break into his house will make the whole party laugh out loud. You might have watched Home Alone as a kid and enjoyed it, so why not let your kids have the same experience we are sure once they watch it, they are going to enjoy the movie.

This movie starts when an 8-year-old is left alone accidentally by his parents on a Christmas night, and now there are two burglars who are trying to break in to rob his house filled with money! Watching how he fools and tricks them is one of the most satisfying things, also one of the burglars is “Joe Pesci” whom you hardly see in movies, watching him play such a character was a delight in itself. Home Alone would be a great flick to watch and it’s one of the Top 10 Movies to watch at a BBQ Party with your family & friends, your kids would be happy with this choice.

Time for some “Action” while having grilled meat, this movie will keep you on your toes and you can enjoy it thoroughly while enjoying the party. A Movie that stars Antonio Bandera & Salma Hayek together, now that’s hotness stuffed inside a movie just like hot meat stuffed inside crispy Tacos! A Movie of revenge where a musician named “El Mariachi” played by Antonio Bandera arrives in a small Mexican Town after he had disappeared from the scene for a long time. Desperado is hilarious and just one action-packed fiesta, Salma Hayek is so hot that she is causing car wrecks in the movie and De Almeida just kills it as the mustache-twirling villain.

You will see Quentin Tarantino as an actor in the movie! This movie was beautifully made by Rodriguez and it will have the whole part tapping their feet to the music don’t forget the guitar case miniguns and RPGs! It is a Perfect Latin Action filled movie to watch with your family and friends at a BBQ Night Part in your backyard.

The War against drugs between Mexico and USA is shown amazingly in this movie, Denis Villeneuve has made a masterpiece that will stand strong against time and will be a favorite forever for Cinephiles. Sicario means “Hitman” in Latin, and this movie revolves around the act of stealth and the aura of the tension it creates during the scenes. This flick will have you stop eating your BBQ and focus on the scenes, sometimes such movies light up the mood of a party in a different way. Benicio Del Toro looks like the strict uncle who looks like he is always on the verge of killing someone, there are many big actors like Josh Brolin, Emily Blunt, and Daniel Kaluuya.

The Radical views on corruption and the corrupt officers who go through tough scenarios, but there’s nothing more amazing than Denis Villeneuve’s flawless construction of tension in Sicario, you should definitely watch this movie with your family & friends at a BBQ Party.

The Narrator feels like the protagonist of the movie as you hear him commenting on the whole movie, and when he stops you start wondering if something is wrong. The woman who discovers herself on this trip and it perfectly shows that sometimes in life all you have to do is make the first move.

People who love movies know that Casablanca is a masterpiece, this black & white movie was always ahead of its time, and still, people rate it full stars. The Impact it had on the movie culture was amazing, this studio-backlot wartime romance that jumps out off the screen with the help of Bogart's pain-filled performance and Bergman’s heavenly closeups of her beautiful face. Every moment in this movie is iconic and it’s like this movie is something we would only dream of, but it exists in reality and we are grateful for it. Casablanca would be a perfect movie to watch at a BBQ Part as it will set the mood and spin back the clock back in time.

The Movie which made women terrified of taking showers, Psycho is the best movie by Alfred Hitchcock and his arsenal is full of such movies. He gets us sprung before showing the most brutal murder that has ever been depicted in art, the characters of Anthony Perkins (Norman Bates) and Janet Leigh (Marion Crane) are the soul of this thriller! Hitchcock created something called “Psychology” for the first time for an American audience and it messed up their minds. We are sure that if someone offers you milk with dinner like that’s totally an acceptable beverage we can assume that they are mentally ill, or they have watched this masterpiece by Hitchcock and are trying to scare you. This is one of those black & white movies you can watch and enjoy with your friends and its easily one of the Top 10 Movies to watch at a BBQ Party with your family & friends, but be aware as it might have you checking over your shoulders if someone is approaching you with a knife.

The Perfect Spaghetti Western cult movie, the Mole also famously known as “El Topo” is a story about a man who embarks on a journey with his son in the desert to help him bury his innocent childhood in the sand and come out as a man. Here the lead character El Topo likes to think of himself as a god riding a horse in the mystical deserts in jet-black clothes, he goes through a village where he finds out that is being troubled by a group of bandits. El Topo decides to avenge the people who have been massacred by these villains and then forcibly like the perfect western character takes the leader's woman known as Mara and makes her fall in love with him. This Movie is an amazing flick to watch with your family and friends on a night when you are grilling some BBQ and want a western movie to go with it.

Time Share is one mind-bending Mexican movie that is something like the series “Dark”, the movie puts up a solid tension accompanied by a perfect background score that gets under your skin. This Movie shows us how Malevolent corporations are and how they manipulate their employees into achieving their target sales monthly like robots. The idea of living in a hotel and being catered to 24/7 Is a dream for some people, but not when you are a hamster running on a wheel and working for a shady company. The concept of the movie “Time Share” is amazing and it's great throughout the movie, we don’t want to disclose more about the movie as you should watch it. The Movie is made by Sebastian Hofmann who you should definitely keep an eye on, the evil American company and how it controls its employees for work is scary and intriguing at the same time. This movie will be one of the best choices as it is one of our Top 10 Movies to watch at a BBQ Party with your family & friends.

Based on the 1970s in Mexico, this movie is about women’s lives, the masterful demonstration, and a reminder that life does not fluctuate between moments of joy, triumphs, success, and moments of heartbreaking loss. Roma is more than just a glimpse into Cleo’s life, this film shows us what some women like Cleo go through every day in their lives.  This might make you hug your mama tight and make you thank her for all the hard work she did to give you the life you got today. Mexican women are hardworking and strong, this movie shows how Cleo goes task after task and lives her life as if she was just born to do labor.

Roma is at its best when it forces the audience to take in everything of its lovely rendered details, it's like a gentle version of extreme cinema which says “Here look at this reality!” In the future people will talk about Cuaron in the same breath as Tarkovsky. The forest fire scene and the beach scene were cinematic brilliance, this heartfelt love letter to the Mexican community women from Cuaron is something you should watch with your family on a BBQ Night.