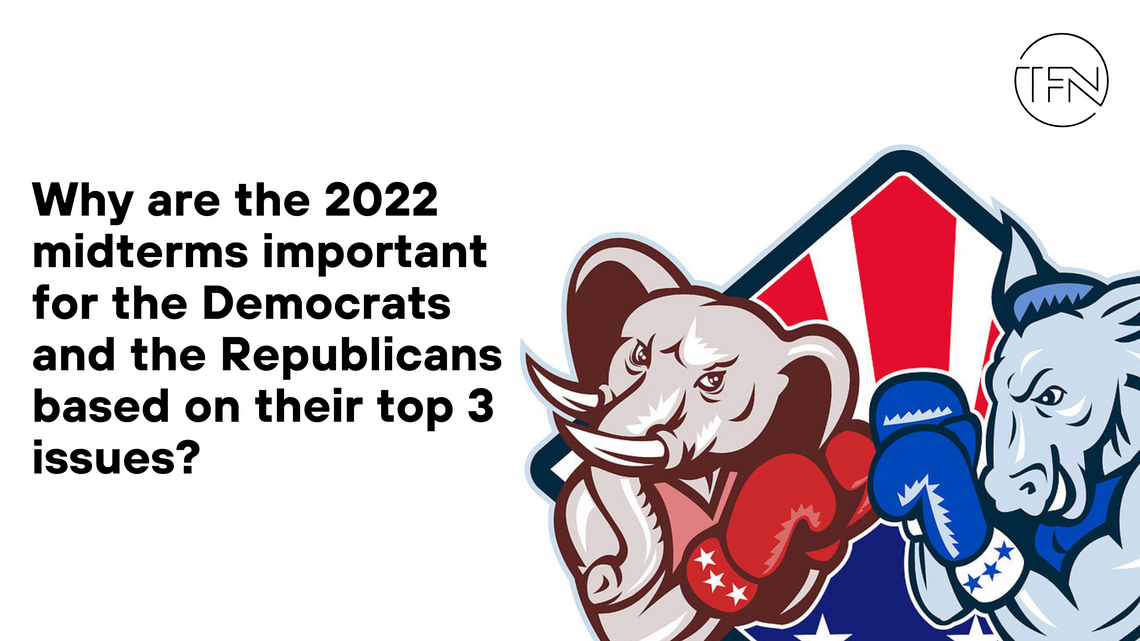 Why are the 2022 midterms important for the Democrats and the Republicans based on their top 3 issues?

Based on issues mentioned on the candidates campaign websites, talking points on main stream media by the the readers or their closing statements during the election debates, and most importantly on the ads they spend their money on.  The Democratic party leadership like President Obama & President Biden talking points helped curate this list for the Democrat party.  With Mitch Mcconnel being tacitly quiet, President Trump, Governor Ron Desantis and Republican senators talking points help curate it for the Republican side.

Important Issues for Democrats campaigning on:

Abortion (Reproductive Health):  Since the supreme court sent the decision back to each state to have its citizen's vote on allowing the citizen of the states to decide on abortion, the Democrat party has been using that as galvanizing issue to rally the voters including most of their senators and congressional candidates mention it on their campaign website under reproductive rights.  Incumbent Democrat Senator Catherine Cortez Masto, has a earned a   100% score in National Abortion Rights Action League’s (NARAL) Congressional Record on Choice every year she has served in the Senate, would like to enshrine Roe protections into federal law and guarantee equal access to abortion in every corner of the nation, by passing Women’s Health Protection Act.  This is in line with the Democrat position taken by their candidates getting endorsements from NARAL, like Senator Warnock, Sen. Patty Murray and others too are endorsed.  The Democrats want to make reinstitute Roe-v-Wade as the law of the land as stated by President Obama in a TikTok bring out the vote ad campaign.

January 6th & threat to our Democracy:   The Democrat party been the majority party in the Congress, ran the agenda.  January 6th Committee hearings according to Democrat candidates have been front and center of protecting from the threat to democracy and features on their campaign website.  John Fetterman, claimed in addition to "voter supression, election denial and  events of the January 6th, a serious danger to our democracy"  On Nov 2nd, President Biden in a speech to the nation, stating "Our Democracy is at risk" with the backdrop of the Paul Pelosi's incident and claims of political violence.

Climate Change:   Alexandria Cortez's the champion of the "Green New Deal" has this as the only issue on her campaign site.   Mandela Barnes, Democrat Senate candidate from Wisconsin, suggests America is facing once in a generation storms coming every year and necessitates taking bold, powerful action on Climate Change.  Climate change was also part of the President Obama's tiktok bring out the vote ad campaign.

Fix the Border Crisis:   Georgia Senate candidate Herschel Walker's website summarize's the Republican position on the border issue, "Herschel is fully supportive of those who follow the legal immigration process, he believes that our leaders have a Constitutional obligation to secure America’s borders and keep Americans safe."  Majority of the Republican Senate candidates, categorize the border issue as "Border Crisis" which Ron Johnson Senate incumbent from Wisconsin, hosted a "Crisis at the Border" round table on what he called "Biden Border Crisis" .  J.D. Vance, Blake Masters, Marco Rubio and all other Republican senate candidates categorize it as such.  Kari Lake has taken the border discussion to the forefront in her AZ Governor's race, by bringing up "Crisis on the Border" in her interviews with media and rallies.

Crime & Defending the Police: Blake Masters running for Senate from Arizona, on his website, claims  "Democrats are the party of lawlessness and anarchy. We have lawlessness at the border. We have lawlessness in our cities." calling out to "Stop the Biden Crime Wave".  Crime as an issue is echoed by Herschel Walker with "Crime is out of control in our cities" and defending the police.  Marco Rubio, Ron Johnson, J.D. Vance and other Republican's candidates are on the same page.  Lee Zeldin, running for New York Governor , anchored his campaign on Dem Crime Crisis back when first started his campaign, 10 months ago, on Dec 28th, 2021  talking to Fox's anchor Kudlow.

Inflation: Republican senator Rick Scott's "Dem Spending Inflation hurting poor  families"take on Oct 6th,2021 and onwards to  "Democrats government spending is causing inflation"  on the Squakbox on Sept 22, 2022 has been consistent with his critic.  Many of the Republican candidates like Blake Masters, Ted Budd have taken the same position as Sen Rick Scott.

The 2022 midterm elections results will show which party is in step with the citizen's of the country and who is out of step with their key issues.